Sorry this post has nothing interesting to say about herbs, other than the fact that I should probably be taking mimosa elixir by the shot right now.

Life events like these might be too personal for some to share in such a public way, but this is just how I’m dealing.  There seems to be a lot of endings happening in my life lately.  Close, lifelong friends are moving away to retire, another family friend is dying (I helped to care for her husband last year at the end of his life), and my 94 year old grandfather is at the end of his life and just can’t let go.

I really should be working on some school assignments, but my mind just can’t focus on that this morning.  I’m sitting at my grandfather’s bedside on deathwatch.  Again.  Counting breaths.  Counting seconds between breaths.  Anticipating his release.  How is he still hanging on?  Why is he still hanging on?  He’s been asking me to just give him “the goddamn shotgun” for well over 6 months now.  I’ve seen this several times now, when someone just can’t let go because their body is too stubborn.  If anyone is unconvinced that Death with Dignity should be available to everyone (not just in the state of Oregon), you’ve not seen people die the way I have.

Seven years ago, I was in this same exact position with my Nana.  Counting breaths, sleeping on the floor, giving morphine hourly, or at the slightest sign of her being in pain.  She had such a gentle strength in her life and her death.  She never lashed out at any of her caregivers and was ever aware of the burden of her care.  It absolutely killed me to see her wither away, because I knew that her death would irrevocably change the family and the farm forever.  And it did.

Four years ago, I witnessed my grandfather’s wife die after a long illness.  They have this fat little dachshund named Daphne who they absolutely adore.  When Grandma Jean was taken to the hospital that morning, I knew she wouldn’t be coming home.  I dug the bi 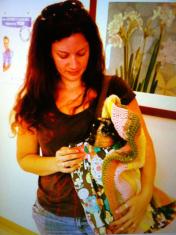 ggest shoulder bag I could find out of my closet, stuffed the dog in with a blanket and snuck her into the ICU at the hospital.  My grandfather’s face lit up when he saw who I brought with me, and I managed to pass her off as a “baby” for a few hours.  Every time a nurse came in, I  wrapped the dog in a blanket and stood by the window and swayed back and forth, patting the “bundle”.  They eventually caught on and promised to keep it hush-hush because they saw what a comfort it was to my grandparents to have her there.    She got to be with her dog u

p until her last breath.  Four years later, I’m sitting next to his bed with the same dog, only she’s gotten even fatter (all those table scraps).  He is nicer to that dog than any of us.  He can yell and curse at me and in the next breath talk to the dog like she’s a baby.  He always saved the last of his supper for her.  He feeds her dog treats intended for great danes.  She has more dog toys than she knows what to do with.  He even built her a coffin while he could still handle his woodworking tools.  People in this stage of life (death) tend to be a distilled version of their former selves.  He taught us how to curse and spit.  He never apologized for his opinions and let you know you were doing it wrong, goddammit!  You should have seen and heard the colorful display he put on when I refused to give him his car keys for the last time or when I made his oatmeal wrong for the umpteenth time (never enough salt, goddammit!).  He hasn’t been conscious much in the last 24 hours except to yell and curse at us when we re-position him or give him morphine, call out for Charlotte (whoever that is), and say he’s going to Ludwig’s Corner (he used to show horses there), but when I put Daphne on the bed just now, he opened his eyes and said, “Oh, hello!”, then passed right back out.  Drugs and the dog.  It’s all I can give him at this point.

That’s all for now.

The Art of Enchantment
Gather Victoria

A Site of Beautiful Resistance

A vehicle for the imagination

at the foot of the elderberry

The Art and Craft of Blogging

The latest news on WordPress.com and the WordPress community.

The Herb Society of America Blog

"Never does Nature say one thing, and wisdom another"

Of Life, Love and Growing Food